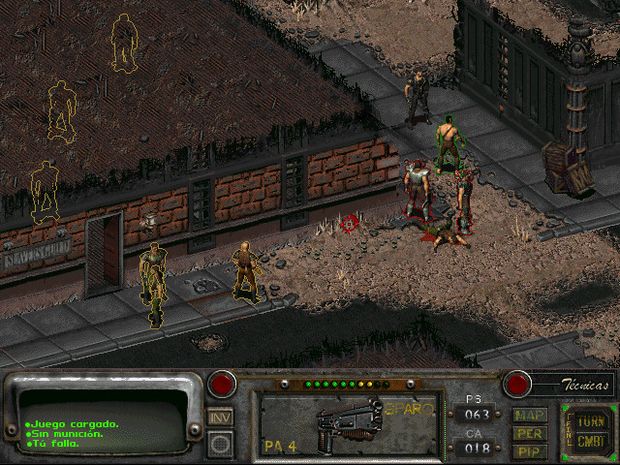 Slavers are the first serious battle in Fallout 2. It's best to hold it off until returning from Vault City.

Fallout 2 is one of the last titles by Interplay before it dumped Black Isle, and by many considered to be the last great PC RPG of its era. Very little is taboo in this game, so much so that the game had to be censored to make make it lawful in Europe. Great story and great challenge, this game is highly recommended for anyone interested in hardcore gaming.

Killap's patch is a work of many years, an attempt to squish all remaining bugs in Fallout 2. It is a must have, if you want to play vanilla game. This guide assumes that you have it installed.

In addition to the patch, Killap and other contributors have gathered and reintroduced much of the unfinished and/or cut content into the game. The quality of the said content varies - some of it has been cut for a reason. Nevertheless, it's worth trying at least once, to make your own opinion. The Restoration Project includes the patch mentioned above, so you only need one of them.

Economy and Combat rebalance mod is only available to Restoration Project users. It overhauls trading, combat, adds crafting and some other features, all of that optional. It's definitely worth checking out if you use RP.

FO2tweaks is a collection of convenience tweaks, common sense changes and ease-of-use cheats, designed to smooth many annoying aspects of the original game.

Party Orders is an awesome addon - if you use companions, that is. It allows to issue orders like Regroup, Scatter, Pickup Items, etc. It's included in EcCo and RP, but also can be installed standalone. The latest version is here.

The early game is what's considered to be what pretty much every character has to do before getting the experience, money, and freedom to move around without a lot of restrictions. Fallout 2 does allow you to basically cut loose from the second you leave Arroyo, but unless you are metagaming (considered cheating for this particular game), your character will have no idea where anything is, so your path is a bit linear for a while. Beyond all that, you have next to no money, no armor, shitty weapons, and no friends. Bandits or slavers could kill you easily if you tried to wander too far, so you need to bulk up, arm up, and make some money. This means getting to roughly level 10, banking about $5000, getting good weapons and armor, and getting the car. If you are doing a blitz run to something, you will likely leave a lot of the early game for 'later'. Blitzing to something is fine just so long as your character knows precisely where they're going at all times. It'd be ideal if you had a quest that brought you to a certain place (such as scouting NCR for Vault City), but after you know the coordinates of a city, that's not really that necessary.

Why is metagaming considered cheating? Because FO2 is surprisingly fair in its dealings with you and refrains from giving individual NPCs ridiculous bonuses (for the most part). They also cannot convienently ignore rules that you have to follow. Further, metagaming totally takes the fun out of the game and utterly removes the challenge of the run. You're free to metagame if you like, of course, but this guide will assume you are not.

The midgame is the part that ends most hardcore runs in Fallout 2. The linearity of the game breaks up a lot after you get the car and enough HP to survive more than a few fights. Play styles vary wildly here, so this part of the walkthrough will be organized with cities/encounters in alphabetical order after the first bits of housecleaning are done. Each quest or quest line will have checkpoints of general numbers you need for combat skills, hitpoints, supplies, and so forth that you'll need to properly finish each quest.