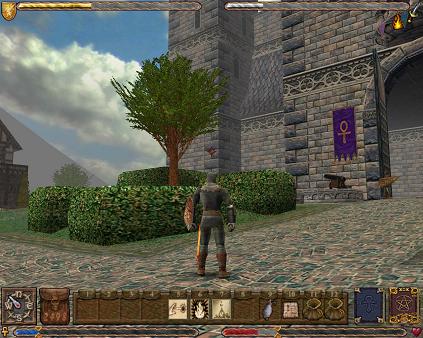 Ultima 9: Ascension is the last iteration in the cardinal Ultima series and brings to an end the story of the Avatar. It is somewhat disappointing as a successor to U1-U7, having a rather bland storyline mixed with some bad voice acting. As a standalone RPG, it is decent. It is combat-heavy, almost falling into the category of "First Person Slasher". This guide assumes that you will be playing with the unofficial 1.19 patch installed and the Economy/Monster patch installed. Do not play this game without installing the 1.19 patch and the Economy/Monster patch. I cannot stress how critical these are to making the game playable. You can get them from here at the Downloads page.

There are 8 classes in Ultima 9, each corresponding to a particular virtue. For a list of each class and the start statistics of each, see Classes.

For the sake of survival, I suggest choosing either Fighter (Valor) or Ranger (Spirituality). The fighter will give you more starting HP than any other class, with 3 Strength. You will have very little mana, but you'll have no access to magic for the first portion of the game, when survival can be most difficult.

From a pure powergaming standpoint, I would pick the Ranger. With a combined total of 6 in stats (2 Strength, 2 Dexterity and 2 Intelligence), he has more stats than any other class. You have the same amount of HP as Paladin, more mana than a Fighter and a point in Dexterity, which will let you learn more weapon feats if you want them.

The guide will assume you choose Ranger. The pure mode guide assumes you pick Mage.

Much like Morrowind and Fallout 2, Ultima 9 has been greatly enhanced by dedicated fans fixing glaring flaws the developers (in this case the publishers) failed to address. Ultima 9 is already a very buggy and crashy game. The 1.19 patch addresses a huge amount of flaws, particularly with game stability, and is critical to have installed before you begin. There is also the Economy/Monster patch. This patch, while not critical, is highly suggested. Without it, the game feels much more cramped and linear and gives you no incentive to "explore". Install both or perish in flame.

I have designed a ruleset of sorts for people who want to turn U9 into an *actual* challenge, something that makes the game quite difficult to complete. The rules include such things as limitations to how you can acquire items (no stealing), limitations on what armor can be worn and more. If you are interested in (re)playing U9 and giving yourself a hell of a challenge, check out my Pure Mode rules.

Assuming you don't stray off the beaten path, the early game is extremely linear and does not give you much choice on how to proceed next. Once you leave for Bucs den, you have a large portion of the game that you are rushed through, without giving you much breather room. That makes picking the right attributes and being prepared in advance a critical step. However, combat wise, there is not much that can slaughter you at first, making it mostly a test of patience. This includes your first trips through Britain, Paws, Dungeon Despise, Buccaneers Den, New Magincia, Ambrosia, Dungeon Hythloth and Dungeon Deceit.

Midgame U9 gives you a little more freedom than the early game, and pits you against some more difficult tasks. Particularly, areas near Moonglow and Covetous can be troublesome for HC play. The midgame takes you through Moonglow, Yew, Dungeon Wrong, Minoc, Dungeon Covetous, Terfin, your second visit to Buccaneers Den, Trinsic and Dungeon Shame.

After Trinsic, the difficulty steps up a bit. There are more creatures you encounter that can dispatch you quickly, such as Daemons and Dragons. You also face the tougher areas of Terfin's second visit and the Abyss. By this stage in the game you are extremely powerful, however there are still many potential areas that could spell disaster if you don't watch out. This takes you through Valoria, Dungeon Destard, Skara Brae, the Abyss, the Void, Terfin and the end game.