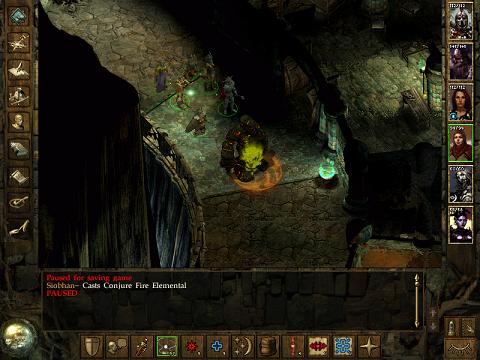 Summoning a Fire Elemental with a Druid

Icewind Dale is another Infinity Engine game. This time, Black Isle themselves took the reigns as developer as opposed to Bioware, creators of the Baldur's Gate series. While light on story, the game's battle sequences are exceptionally difficult, easily three times more difficult than anything encountered in the entire Baldur's Gate saga and you aren't given a leg-up in terms of abilities because none of your characters can excel beyond the stages of simple player characters. You'll have no godlike powers to help you by this time, nor as many options in terms of raising statistics permanently. Lastly, loot is random for the most parts. Certain bosses always drop certain loot, but often times, many things such as loot found in treasure boxes are completely random, making it more difficult to plan a character as you don't know when or if you're going to get some overpowered weapon. Despite the difficulty of battle being over-all harder, the game is given a 7 instead of 8 rating purely for the fact there is more wiggle room for failure. As your essence doesn't fade away into the great pool of Bhaal life force when you die, any given character can fall in battle without it spelling a game over.

All characters are completely made by you, so your skill in character creation is paramount to your success. Everything written for this guide assumes you have installed both the expansion, Heart of Winter, and the free downloadable expansion, Trials of the Luremaster.